When I found out that Brussels have a series of murals of characters from comic strips/books through out the town, I was so excited, I love a treasure-hunt-like adventure.

Because I have seen most of Brussels main tourist attractions on previous visits, the trail was a perfect way to focus my trip. I was also hoping that I might get see a different part of Brussels.

I bought € 0.50 cent the BD (bande desinee) map in the tourist information centre. After that, I started the journey from the closest point indicated on the map. Which turns out to be a statue of a Smurf, outside a shop full of Smurfs. *grin*. I didn’t buy anything , everything was so expensive. 😦 At the same place they also have Moof, museum of original figurines, it was €8 for adult. The place looks like a load of panels, more shabby pop up then actual professional museum. Keen to get on and find all these points in the map, plus being a bit stingy I didn’t go in the museum. 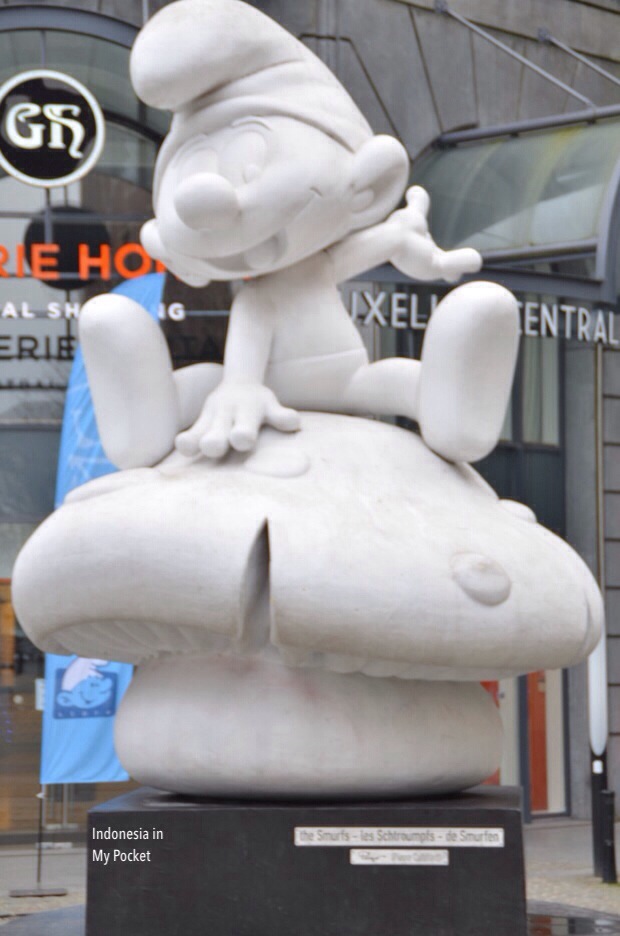 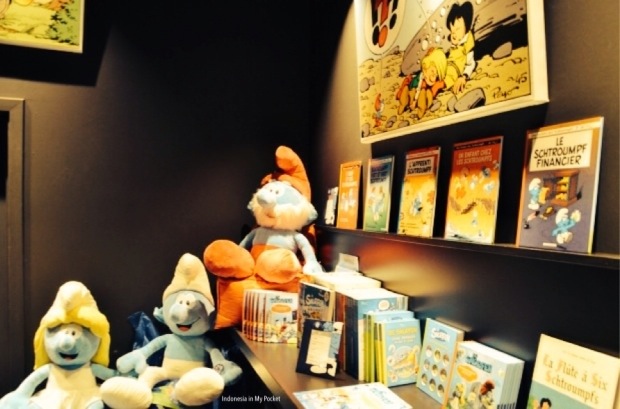 In an attempt to make it a circular route I continued the walk anti-clockwise. Next I found Gaston Le Gaffe statue.

Then the map lead me to Bande Desinee Museum. Because I have been to the museum before, I decided to go to the museum across the road , Mark Sleen museum, instead. I had to buy the tickets €2.50 in the BD museum, after a bit of a look at the shop and picture taking at the BD museum I sauntered over to Maerk Sleen’s museum. It is really tiny, it could be dissapointing if you are not a huge fan of comic books, illustration or obviously Mark Sleen’s work. It was quite interesting for me though, mostly about his character development and background.

After the brief visit I carried on the walk to found more murals, all over the town. What is amazing about this murals, they are in pretty good conditions, despite the fact that they have been there for a very long time, the first fresco was painted in 1996.

Some of them feature scenes of Brussels. 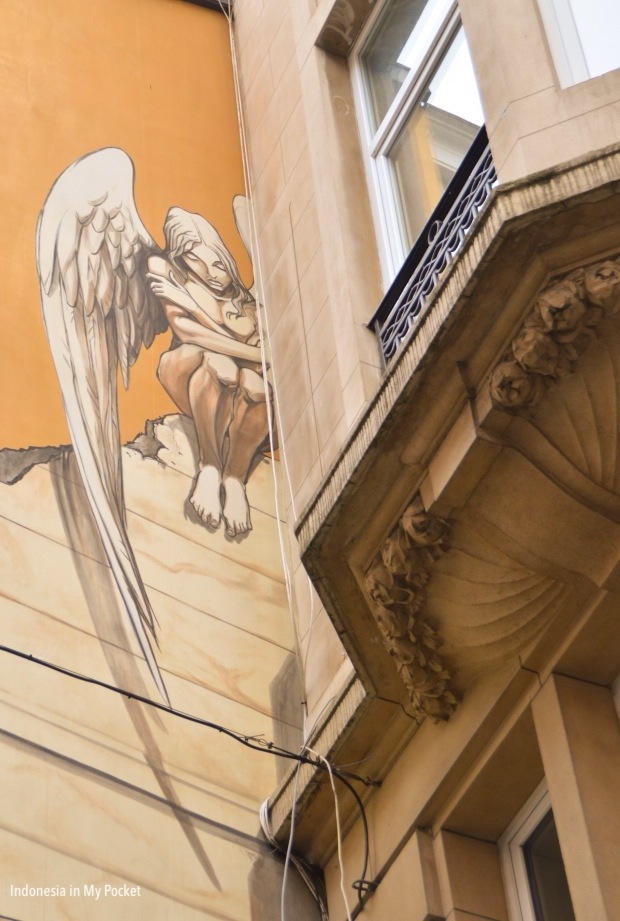 Some of the characters I did not recognise

And some feature my favourite bright characters

There are 24 murals on this trail. It was a very interesting walk to do. Comic books were a big part of my geeky childhood. I spent a lot of my childhood reading them. My first visit to Brussels was the impetus of me learning French in CCF (Centre Culturel Francais) Jakarta for a number of years, simply because I wanted to read more comic books.

I discovered that most of my English colleagues do not know any of these French/Belgian comic strips. It made me realise that they grew up to the limited set of comic books such as Beano. Whereas in Indonsia, I think although there was no free libraries, we had more translated books and stories from different countries. That opens up a lot of things.

I am going off on a tangent, sorry. I was wondering whether it is the same in other countries. Did you read these comic books when you were growing up? Would you do this walk in Brussels.

Online there is a concised map from the brussels.be, this just indicates where they are generally. There is another map that tells you what they are, here. Oh, I found this page, which gives the details of each Mural. So the walk could be practically free. But I would really recommend buying the map, it is only 50 cent, it gives you a good map and explanation for each fresco. It also give you other places outside central Brussels you can see more murals.

← Happy Sunday ! from Brussels
Waffles, Fries, and Chocolates in Brussels →