Okay, I admit the whole post is going to be in English just to be Ironic. Not the kind of Irony that Alanis Morissette was talking about which essentially mean “bad luck”.

Lately I have been reading a few Indonesian blogs that is criticising people who are using foreign words in their speech. Which I found myself agreeing to their comments and observation. In fact it was not long a go that I heavily criticised a book that used a lot of foreign words myself. There was even a blog update that mentioned Indonesian is criticised by a traveller for not using what they called Indonesian equivalent, such as instead of mengunduh some people use donlot from download.

Now this made me question a few things.
1. Is it really wrong to use foreign words in your speach generally? Because being self concious I do use foreign words quite often.
2. Do other languages do what Indonesian do with theirs? Do others use foreign words?
3. Why does it happen?
4. Where does this word “Unduh “came from anyway, because this was a new word to me?

After a bit of digging around, asking my friend who brags about him being a linguist and basically borrowing a few of his books. Here is what I conclude, please bear in mind that my conclusions are up for debate and to be taken like a pinch of salt (as the English say it).

Let’s start with no.3, it happens most likely because the language people are native to have not got words or expression that exactly describes what people are trying to say or feeling. The tool of people acquiring these “new” words is of course the wealth of knowledge and growing experience, powered with the need to communicate makes it happen.

No.2, yes of course. In Japanese they even created a whole set of characters for foreign words. In English, the most commonly used by others, if you read a big dictionary it always provide etymology, or the origin of words, if you go through it there a huge chunk of it came from Latin words, some from French, Arabic and Hebrew. Lately there is also a growth of words from web/technology based movement in English language as it acknowledge words like selfie and defriend.

Indonesian words themselves, like most language, already came from different languages. As I found to my trip to Portugal, Tinta = ink in both language, the most common loanword is Sabado in Portuguese and Sepatu in Indonesian (shoes in English).

I am sure you agree, language are by nature fluid and organic, as it needs to serve its purpose, which is as a mean of communication. It changes through the needs, the time and shift in sociology. Languages that doesn’t do this usually dies.

We then come to the conclusion to the answer of no.1 is NO. It is not wrong to use foreign words in general. So why my title is inviting people to stop using foreign language? well, of course amongst Indonesian there is that other use to using English. What is that? As a mark of social status. And Social Status is quite important for some people, some people, of more than the 200 million population is rather a lot. And trust me, Indonesian are social creatures, why else do social media thrives in Indonesia more than other countries?

Now, I read that it is common to use language to mark social status but normally through the different ways it is spoken and the use of the some words more than others. So it is not uncommon to use language this way. In the UK the way people want to sound more clever than others usually when they use difficult and long words, in writing more than speach. They even have a measurement of readibility of pieces of writing called Flesch-Kincaid, based on different level of educations.

In Indonesia though, there are just not enough words to make that variation of usage, whilst English has around 1 million words, Indonesian has under 100 thousand. So what do they do? speak in English to show that they have been to English courses or even go to English speaking school.

I think the part I have a slight problem justifying to others is the Intent or the purpose, show-off-ish ness of it. Real educated people in UK using long words seems natural, un-educated people uses the long and wrong words to (with intent to ) sound clever, don’t. The same with in Indonesia, I do not have a problem when people are using words replacing those that does not exist in the language or those without the intent of sounding clever or being a show off. What bugs me the most is of course when they are trying to show off using wrong meaning words.

To me it just shows the opposite. What do you think?

So why do She then write in English? you might say. Is she not herself showing off? The answer is no, not really, I am actually doing it to learn, I can humbly say that my writing in both English and Indonesian is s**t.
It is just that most of my ‘ proper writing’ life has been in English and it would benefit me to practice more of it. If you have not read my posts about brilliant Indonesian writers who writes in English, do.

Another disclaimer and one subject I really want to discuss in other post is how I think Indonesian language is a fluid language, that the people are creating words on a daily basis. My latest favourite word is ‘Tongsis’ which is an abbreviation of Tongkat Narsis, I think, Tongkat = stick and Narsis = is from Narcisistic or the love of oneself/how one admire oneself rather a lot. I think it has a better/deeper meaning than selfie stick. No?

PS: Unduh : is from a Javanese origin means taking a fruit from a tree, I am not sure this is actually the best representation of the word Download. Also why from Javanese language, why can’t it be from other regions’ language? 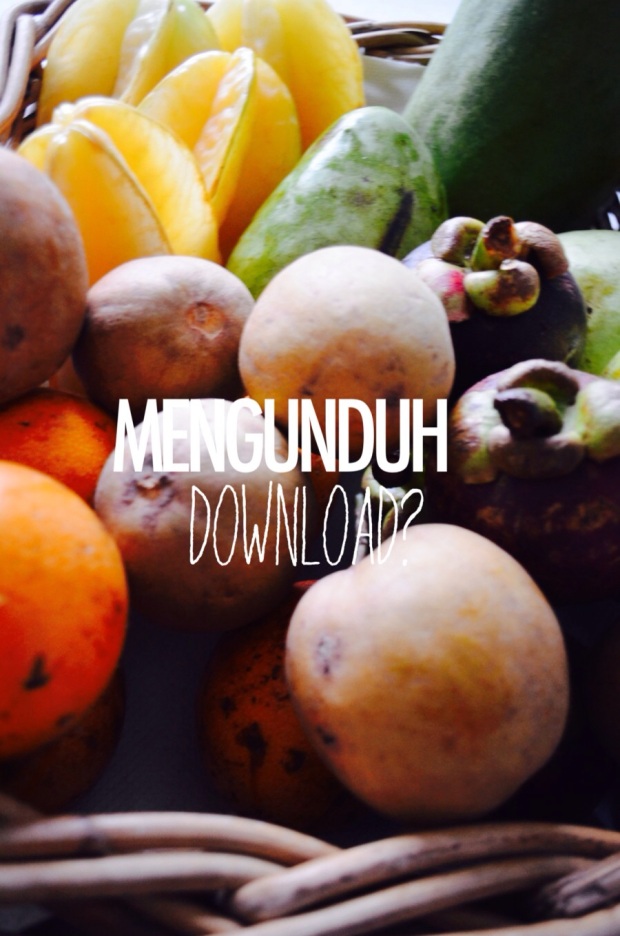