“There is seal over there on your left, you can see, popping her head out” said our guide and captain of the boat who had a strong cornish accent, which almost sound like a pirate. We all turned our head to the left and saw a grey blob popping out in the almost dark blue sea water.

I asked the guide how does he know it is a her, “aaarh”  he said almost like acknowledging that no one else knew “by the shape of its head, I will show you later how to clearly differentiate them”

From  St Mary’s the island I stayed in there are several boat trips, either to the other inhabited islands or to see those that are full of wildlife. But these trips are highly dependent on the weather and tide, so they have a boat association that have meetings to decide everyday where they can go. The boat trips are updated every morning, so you have to go the peer to see the boards that states where the boats are going.

As I really wanted to see puffins, which I heard there are plenty to see in the islands. On the board it said that there was a boat on that day that was going to Eastern Islands, it promises to see sea birds, including puffins and seals. So I booked and the boat went at 10.30 from the allocated peer.

That female seal was the first wildlife  we saw, we then saw some cormorant, and shags. As our captain took us to these islands he told us the name, but I completely forgotten what they are. As we got near to one of the island there were hundreds of shags and cormorant on the cliff of the large boulder rocks. 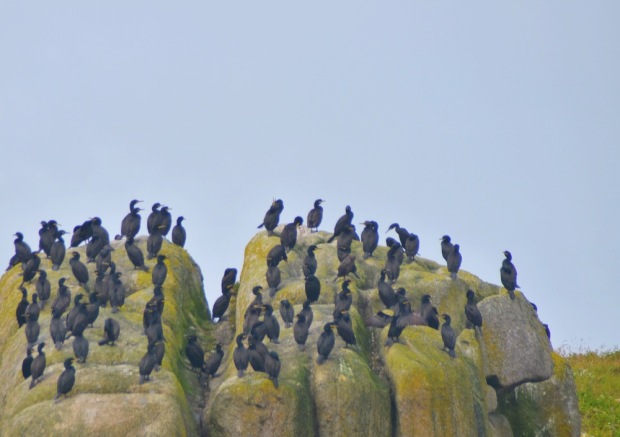 I think when they fly they look a bit like they came from the jurassic period, scary black things with yellow eyes and long neck.

Then the captain introduced us to these cute birds with a scary name of Razor bill. They look like a tiny penguin, and it turned out (*just read it on wikipedia ) They are a close relative of the Great Auks which are although not related to Penguins are the first animal to be called Penguin. Weird!!

“Now lets find these seals” the captain said “They are usually on the rocks over there” As he swung his boat around, we were all looking for the seals, and suddenly they start popping up, poking out their bald shiny heads, then they went in the water again. It is a bit like one of those arcade game of hitting the mole, whac-a-mole.

Very, very hard to take pictures of.  I mean don’t they know? standing on a boat is hard enough, and the model kept disappearing, how was one supposed to hold a camera steady.

Here is an example, how many seals can you see here? 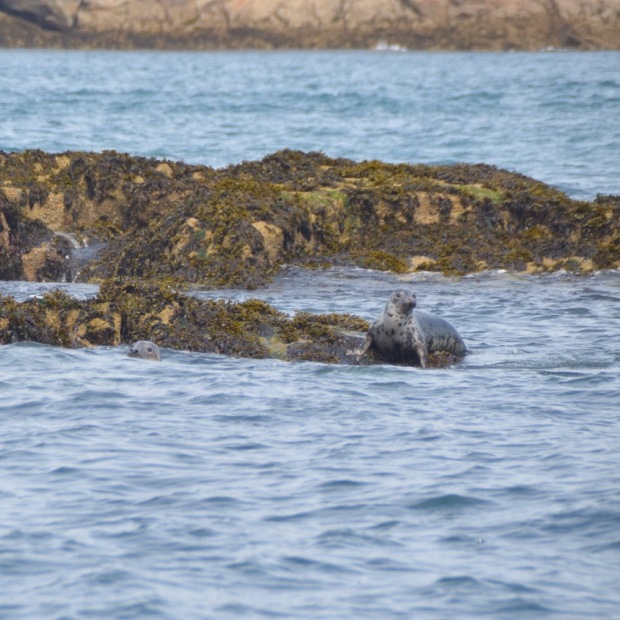 Aren’t they cute though? Look at the baby one below, aargh it’s face.

These are a bunch of old male seals, it seems that they are in a gentleman’s club, having a chat. By the way these seals in the Scilly isles are Grey Atlantic Seals, there are around 500 to 1000 of them in the Scilly isles, apparently these guys have photo id’s of 600 of these seals. Hahaha, seal photo id.

We saw a lot of seals, cormorant, shags, razorbill but did not see any puffins. OH NO, it turns out it is not the Eastern Island trip but it is the Western Islands that they are around.

I feel cheated, by the advertisement, but I can’t complain because I saw a lot of seals and cute mini penguins.

After the eastern island adventure, the weather of the next two days weren’t that great, so the sea was really rough, so there were no boat trips to the western islands. As I was only staying there for 1 week, I really wanted to see puffins, I went on the first boat that was available to go to see the puffin. Which is the next day after a storm, I tell you it was the most rough sea journey I have ever had, with what is considered as a small wooden fishing boat.

They guy below hang out so tightly to the boat, and he never once got up to see the wildlife. 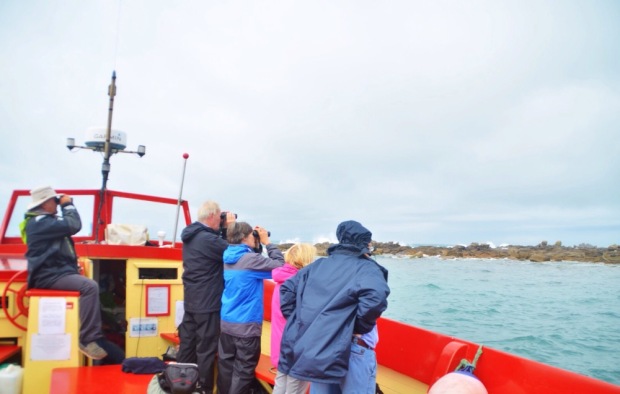 You can see it on this blurry picture of puffin the horizon at the back and how high is the wave here and compared how low I am standing on the boat, which can be seen on the perspective of where the bottom of the picture is.

Oh and plus the Puffins are even tinier than the Razor Bills, so difficult to take a picture of, loads of them, sure, but still. Here is my best pics of them, where you can actually see them. 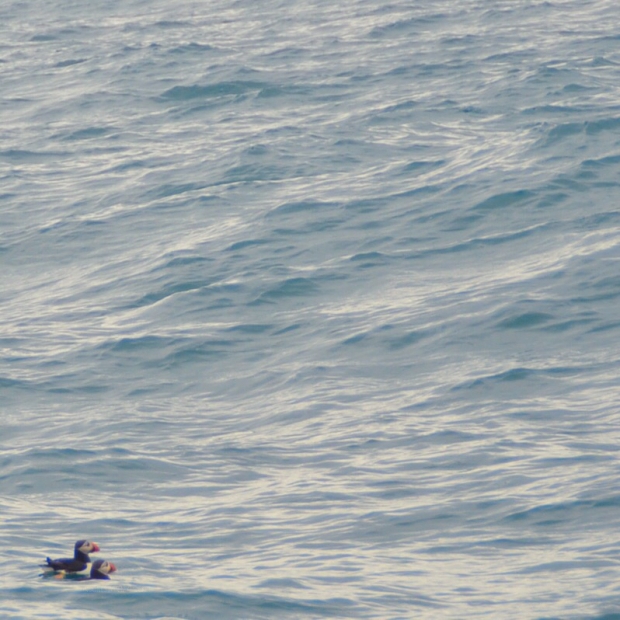 I am so pleased though to have seen these puffins, their orange, red and blue beak and funny shaped eyes makes them look comical but also like a sad clown.

The Scilly Isles is an area of natural beauty which protected, the wildlife is protected and encouraged. Isn’t it cool? No cooped up animal in some kind of sea centre, they are protected in the sea itself. The fisherman and lobster keepers work with the conservation and tourism to maintain the seals even though there is a possibility of the seal eating up their fish, with each seal eating 5 ton of fish a year. Doing things like discouraging tourist to give seal food, so that they don’t relate boats to fish, endangering the seals lives and also making it difficult for the fisherman to get any fish.

Anyway, have you seen any wild seal before? or have you seen those seals that perform with a ball on their heads? what do you think of them.

Now I really want to go see some proper wild orcas, have any one of you seen them? Share please.

← ﻿A Scilly Trip
Menonton Harry Potter and the Cursed Child →

17 thoughts on “Scilly Birds and Seals”