Rumour has it that the next few days in London would be the hottest days in one of the hottest August they had for a while. I thought it would be the perfect timing to talk about a day when I had 6 ice-cream sandwiches and what I thought about them.
Like my tour of best ice cream in London the list came from Time Out. I just had to proof whether they are right or not.

I have been watching their instagram account for a while for these really photogenic macaroon ice cream. The place they sell their handiwork is near my office, however unfortunately I can’t just visit whenever, because they are only open on Saturday and Sunday. Even then they are only open from 12 midday, from a tiny space, naturally the queues are always really long. 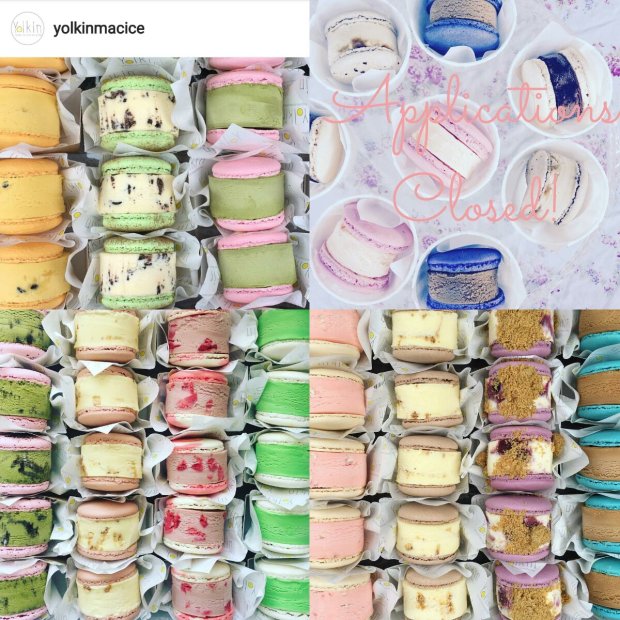 So I dragged my best friend on a saturday to do this tour starting from Yolkin. We queued at 11.45 there were around 30 people in front of us, and the place is not even open yet. The other thing about these ice cream is the lady that makes it, makes different flavours each weekend. There were 4 different flavours : HK milk tea, lychee rose, rainbow drops and chocolate chip.

I had to try at least three right? Can I also say these are not tiny macaroons, they are pretty big. My friend was like “Are you sure you are going to eat all this, and more other ice cream later on?” “Yup!” I said “You can help me out, you are not ordering anything right?” I think I was sort of did it in threatening way.

Anyway, I had the HK, Lychee and Rainbow, we were lucky enough to get a sit inside to eat our ice cream, unfortunately it meant that it is too dark for my pictures. Here they are! Aren’t they cute?

I bought the rainbow drop simply because it was cute! But it turned out to be too sweet. The ice cream was firm when you bite into them, I ate them as I would a sandwich, but other more sophisticated people were using spoon. Haha!

The HK tea, I didn’t click at the start but it is Hong Kong Milk Tea. I love tea tasting ice cream, but sometimes it is too mild, but this one is perfect, not too sweet, just right. Would really recommend this one if the flavour ever come up again.

The Lychee Rose one is also lovely, delicate and smooth, I would recommend this to people who think tea tasting ice cream is weird. On the whole the macaroons were OK, I guess, they kept a bit of their crunchiness and gooeyness, but their flavour was clouded by the huge chunk of ice cream. But they do make them look pretty!
They are £4.50 each, at the moment they are in Siam Eatery, 24a Wellington Street, Covent Garden.

It was lunch time when we got out of Yolkin, but I wasn’t hungry. Maybe it was the 3 ice cream I ate.(@.@) We do urgently need to drink some water and eat something salty. Our next destination has all this and the next ice cream sandwich: Peanut Butter and Raspberry Ice Cream.

This one we had after a slider burger which was pleasant.

The ice cream is hard almost like those watery ones, so it was a bit brittle. The flavour of the peanut butter was a bit to mild for my liking, but the raspberry couli is delicious. The place and the food was nice, if you are ever in the look out for a nice hipster place to eat. I recommend going here.

This place is in a pub, Off Broadway,  on Saturday it is in the middle of the Broadway Market in Hackney.

You buy the sandwich from this window, the sandwiches are kept in a mini freezer on the side of the window.

I chose the Salted Caramel Miso Flavour. I must say the flavour packs the punch, very strong. The sandwich bit is a chocolate cakey thing, which gives it a bit of a nice texture to it.

At first I was slightly dissapointed to see the small size, but I am not sure why maybe because I have eaten 4 ice cream sandwiches already or the really strong taste, I was grateful that it is a small sandwich. I think I am going to have to come back to this market one day to try it on an cleaner pallete. And I want to try the other flavours! The market is one of the nices in London, so if you like your makets do visit this one.

Whilst walking down towards the market I saw some people selling macaroon ice cream but when I look at their flavours, they are a bit too pedestrian and had a sense of bulk made that I didn’t want to try.

Now this place promises a Victorian style ice cream parlour, I am sorry to say nothing of the sort, it was a pretty usual side road small ice cream shop near Tufnel Park. 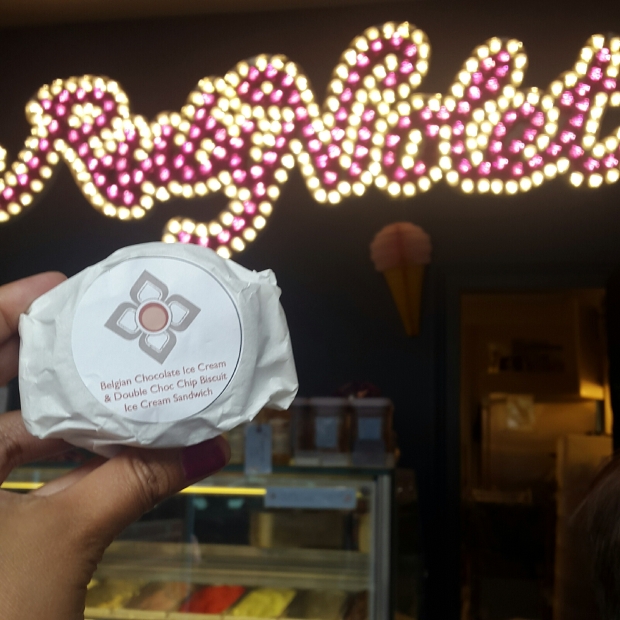 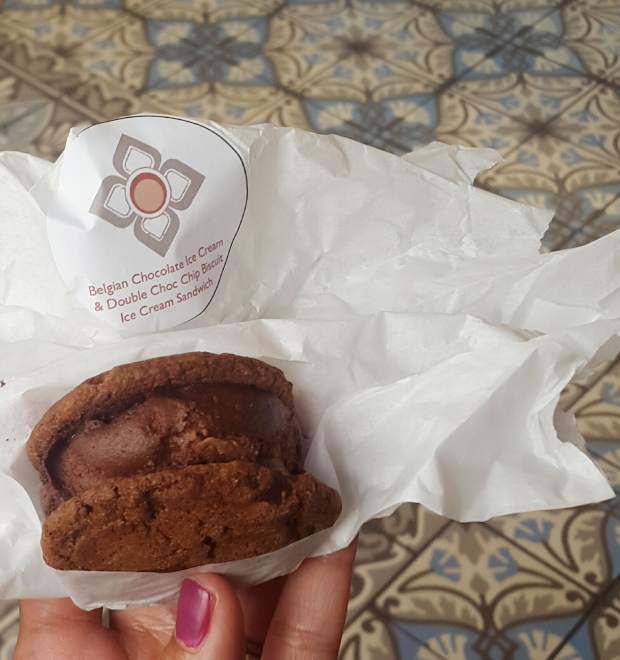 jThere were only one choice of sandwich which was the chocolate. It was nice because it had a chocolate chip cookie as the sandiwch but not really that special.

On the whole I would go back to Yolkin and Happy Endings, and go back to Spuntino for nice drinks, but not toRuby Violet.

Also on the tour we tried to go to Bao who apparently served ice cream in a bao bun, we went to the one in a market in Hackney, but the didn’t have the ice cream kind there, apparently it is only served in the one in Soho, which had a riddiculous queue. so maybe next time.

Leave a Reply to Indonesia in my pocket Cancel reply