I love this place the most out of the places I visited in Yogyakarta this time around. Why you say? Because  :

1.It is called a Water Castle

I just love the name, it came from the Dutch logs that mentioned it as Waterkasteel. But to me it is essentially a Royal Baths, is where the royals have their baths.

2.The buildings were connected by an underwater tunnel

The tunnels used to connect between the palace and the baths. A legend also said that one of the tunnel also leads to somewhere in the south coast where the Indian Ocean is. 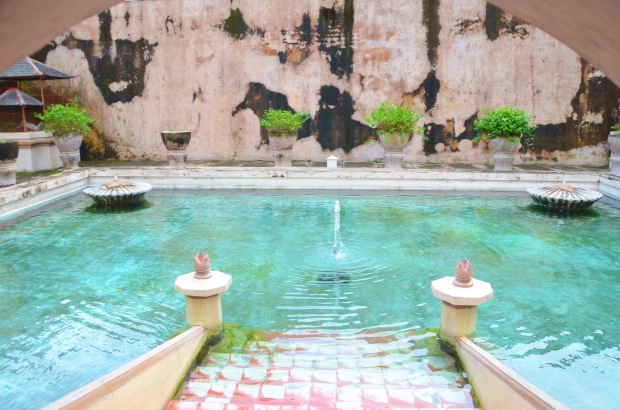 3.The story/ debated story of who is the architecture

Built in  the 1700s at the order of local Sultan, but they are still debating who was the architect. A local manuscript Serat Rerenggan mentioned Demang Tegis – which is a Portuguese Man who was marooned on the south coast, who at first local thought was a fairy, who then became the Sultan’s help, built this. But then there are scholars who said it couldn’t possibly be, because the design is very Javanese, and they said that they could not found any story of the place being built in the Dutch government logs.

4. The complex used to be in the middle of a large man-made lake

Man-made lake is impressive for that time. It sounded like a really pretty gardens, and baths, it also even used to have man made islands. Now the lake is filled with dwellings of people who works for the palace – or they call them Abdi Dalam. I really like this place! To get there you go down to a dark tunnel and then there is this big circular room with a circular opening in the inside that has an open top, with four stairs from leading up to a platform in the middle which is on top of a small bathing place. I am not sure why I have not got a picture of it, probably because when I was there, there was a fashion shoot happening in the middle of the platform. So this pic is from Wikipedia creative commons.

There are so many stories about this areas is so fascinating and intrigued my imaginations. The place is simply beatiful and magical, I think anyway.

Have you been? What did you find most interesting? Do you know any other royal baths that exist in Indonesia?